There is an ongoing struggle in public discourse to tackle how to acknowledging the harm of the past without giving it power to cause harm in the present.

This New York Times article focuses on an excellent example. From the article:

In the debate over the 13 murals that make up “The Life of Washington,” at George Washington High School, one side, which includes art historians and school alumni, sees an immersive history lesson; the other, which includes many African-Americans and Native Americans, sees a hostile environment.

Following the “Continue reading” cut below, I’m going to share a few images of the murals as taken from the article. Content warning for depictions of violence and historical racial oppression. 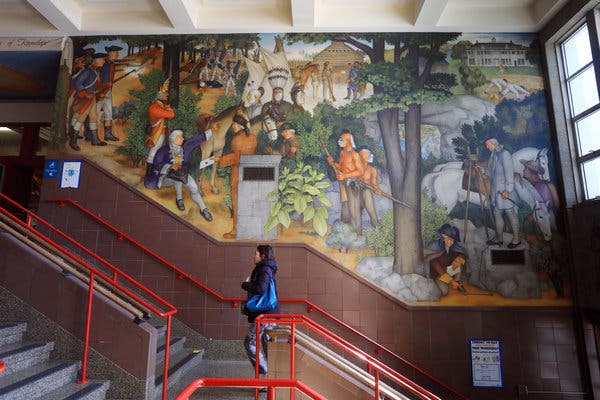 Interestingly, the artist who created these murals (Victor Arnautoff) was a Communist and intentionally made the depictions controversial to stir conversation about the ugliness of the past. Per the article, “He depicted Washington, accurately, at a time when that was rarely acknowledged, as a slave owner and the leader of the nation that annihilated Native Americans. There are no cherry trees.”

The case can be made that these murals artistically and historically have merit. But what about the populations they depict being subjugated – and even killed? Again, from the article:

Stevon Cook, president of the San Francisco Board of Education, wants the paintings covered or removed. “The history we tell is very one sided,” he said. An African-American, he supports teaching this history in classrooms, but opposes “violent images that are offensive to certain communities,” he said.

It also makes sense that echoes of past violence against communities are unwelcome. Especially since it continues the narrative of U.S. history from the white, western perspective.

The biggest issue with these murals seems to boil down to their setting in a public high school. Students and staff are forced to experience the powerful messages of this artwork. Individuals who encounter controversial art pieces should be prepared, should be in a place and context that allows for conversation about the issues present in the artwork so they can be acknowledged and not just silently tolerated on the way to homeroom.

As a library professional, I passionately oppose censorship as an extension of intellectual freedom: defined as “the right of every individual to both seek and receive information from all points of view without restriction. It provides for free access to all expressions of ideas through which any and all sides of a question, cause or movement may be explored” per the American Library Association. But I also think people should have agency in that access. Key to intellectual freedom is the power of protected choice – and, equally key, the power to abstain. If I want to confront historical issues and am prepared to do so, then I should be free to enter that conversation. If for me the emotional burden of that conversation is unwanted, then I shouldn’t be made to carry the weight of the privileged group who remain unaffected or to whom this artwork does not continue a harmful narrative of history.

Interestingly, the school librarian Marianne Philipp disagrees with my perspective. She is quoted in the article as advocating for the murals, stating: “It’s my job to champion intellectual freedom. It’s disturbing to me that this is under discussion.” As I previously stated, the ALA includes in their definition of intellectual freedom the right to “receive information from all points of view without restriction” – so being “disturbed” about a “discussion” that opens up examining the value of these mural from all perspectives seems contrary to the concept of intellectual freedom itself.